Hussein was born in Beirut in 1968 when Lebanon was a place of comparative peace and harmony in the Middle East. He is Muslim, but part of a mixed Muslim and Christian family. His early years were spent in a largely Christian area of the capital. Circumstances like his were not uncommon.
In those days, Hussein says, religious identity didn’t matter so much; young people saw themselves primarily as Lebanese.

This was not to last. The Arab- Israeli conflict began to spill over into Lebanon in the form of thousands of Palestinian refugees. A burgeoning trade in illegal arms and drugs, corrupt politicians and clan-based gangsterism filled the vacuum left by normal government. Lebanon began to buckle under these pressures and in 1975 imploded into a brutal and long- lasting civil war. 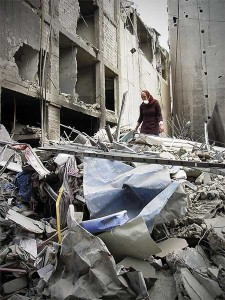 For Hussein, who was seven, this marked the end of his education and, to all intents and purposes, of his childhood. Like many other young men and boys, he was now drawn inexorably into the conflict. His father was badly wounded at an early stage and could no longer work. His medical treatment was costly and Hussein had to leave school and try to find work.

In a civil war, the options are limited and before long, when Hussein was barely into his teens, he was recruited into his local militia and at 18 years old joined the regular army. He rose to sergeant in a commando unit and took part in ‘many wars’, as he puts it, in the late 1980s and early 1990s.

When the Syrian army entered Lebanon, ostensibly to try to end the civil war, they met determined opposition from sections of the Lebanese army, especially the commandos. Exasperated, the Syrians and the Lebanese allies surrounded Hussein’s unit. Those that surrendered were castrated and had their eyes gouged out. The rest held out for several days before somehow managing to negotiate an exit. But they were marked men.

As soon as the Syrians established de facto control over Lebanon, soldiers who had fought against them became targets. Pension rights were withdrawn, payments withheld and, on disbandment from the army, civilian jobs were denied them.
Gradually, the persecution escalated. Men’s homes were attacked and there were frequent arrests and beatings. Then people began to disappear or were found dead. Hussein was picked up several times by Syrian intelligence officers and on one occasion was beaten unconscious and dumped where the body of his brother lay. Later, shots were fired from a car at his house.

You are here: The difference we make / Case Studies / Hussein's Story